To his coy mistress by Andrew Marvell 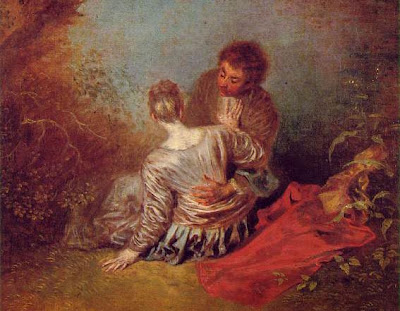 The basic theme of the poem is announced from the beginning, that time lays waste to youth and life passes quickly, so people should enjoy youth now and “seize the day.” In the first section of the poem (to line 20), the speaker uses subjunctive mood verbs such as “would” and “were” that give a delicacy and tentativeness to his style. The speaker presents his “argument” to a listener, a young woman who holds back from reciprocating with her expression of love. The speaker says that coyness would be acceptable if time were in endless supply and if the world was big enough to accommodate all of his admiration for her.

Assuming time continues forever, the poem describes the leisurely pace of life spent in courtship and praise of the beloved, silent mistress.

Beginning with line 7 and continuing to line 20, the speaker embarks on some remarkable hyperbole to describe the praise he wants to bestow upon his mistress. He selects two rivers, India’s Ganges, which is sacred to the Hindu religion and thought of as the earthly embodiment of a goddess, and England’s Humber, which flows past Marvell’s hometown of Hull. The wide distance of two hemispheres separating the rivers compares with the time needed to spend adequately in courtship. That the mistress would find rubies in the Ganges underlines the exotic nature of a river in India. The Humber river in England, by comparison, is a slowmoving, dirty estuary where one is more likely to find old shoes than precious stones. The distance between the speaker (by the Humber river) and the mistress (by the Ganges river) is a metaphor for the luxurious, leisurely consumption of time spent in praise.

In these lines, the speaker describes the amount of time it would take to love his mistress and how much time she would be allowed to turn his love aside. The poem invokes eschatological or “end of the world” events to compare the allotted time — the great Flood by which God cleanses the earth in the Bible or the conversion of the Jews popularly thought to happen immediately prior to the Last Judgment. These excessive comparisons stress the unimaginably large amount of time it would take to adequately define the speaker’s love for his mistress.

The speaker creates the metaphor of “vegetable love” that grows very slowly but amasses enough bulk to be larger than a great dynasty or colonial empire. Because of the depth of his love, the speaker’s “vegetable love” covers much of the earth’s surface, as did the British empire during its peak in the nineteenth century.

The speaker fills out the hyperbole begun in line 7. This catalogue of the amount of years devoted to worship of each of his mistress’s physical attributes is outrageous; we find staggering overstatement in the 100 years for her face, 200 years for each breast, and 30,000 years devoted to the rest of her body — an exponential increase! The speaker devotes at least one generation to praise of each part of his mistress, especially to praise of her pure heart, which is saved for last because of its special place as the seat of amorous passion. This catalogue resembles and perhaps parodies the style of Petrarchan sonnet writers, who used standard metaphors to describe their mistresses. However, Marvell’s comparisons are notable for their excessiveness and originality.

In this close of section I, the speaker introduces a monetary metaphor: loving at a certain “rate,” like an interest rate charged by a bank for lending money. The speaker implies that the mistress deserves this “state” of lavish praise because of her beauty.

This is the logical turn of the poem, shifting from wild exaggeration to somber images of the grave. The subject of death intrudes into this love poem, turning the mood away from the subjunctive to focus on the limitation of time. Time is personified as a driver in a chariot. In popular culture, Time is usually pictured as a robed old man holding a scythe — a sinister figure inspiring fear. The verb choice of “hurrying” introduces anxiety and darkness into a formerly light and extravagant, lyric poem.

The image of vast deserts begins a macabre list of comparisons having to do with sterility. Deserts are hot and barren, a denial of the life-giving processes of love and sexual activity. No wet, living “vegetable love” can be found in Marvell’s desert.

These lines emphasize the loss of beauty that happens to all people over time, especially pertaining to the mistress. The “marble vault” is the resting place for the deceased mistress’s corpse. The speaker’s song of praise will go unheard and unsung when death levels them both; thus the implication is that death is a final stopping place beyond which no magnificent love can escape.

The speaker’s grotesque image of the worm penetrating the virgin corpse as it consumes the rotting flesh shocks many readers. The point is that such preserved virtues mean nothing when stretched over the expanse of time. Thus, the speaker offers another persuasive reason for the mistress to give in. “Quaint honor” reflects that fact that virginity will seem a quaint but useless treasure at the end of life. The speaker alludes to the Biblical phrase of “ashes to ashes, dust to dust” (commonly used at funerals) to emphasize his thriving, passionate lust being reduced to oblivion, just like the mistress’s virginity.

With the close of section II, the poem uses understatement and irony, praising the grave as a “fine” and “private” place. This is a perfect transition to the carpe diem theme of section III. The speaker uses a grammatical pause to interrupt line 32, making him seem humble and modest. The speaker’s charm and tactfulness are implied by the restraint he uses to punctuate line 32. (In poetry, taking a pause in the middle of a line is a called a caesura.)

Section III returns to the theme of youthful lust. The speaker uses imperative mood verbs that give commands, exhortation, and urgent directions to his mistress. While youth is present, the mistress’s skin glows in vitality like the morning dew. This simile as originally published used the word “glew” instead of “dew.” Some scholars suggested that “glew” was a dialectal form of “glow,” as in “the skin’s healthy glow.” The alternative possibility that “glew” means “glue” is not attractive to the tone of the lover’s argument. Probably the best choice in modernizing a seventeenth-century poem would be to substitute “dew” as in the present text.

The speaker says that the young soul of his mistress breathes out through her beautiful skin in “instant fires” of enthusiasm and passion for love. The speaker wants his mistress to yield to his lust now while she can still respond before time takes its toll.

The speaker makes use of a set of harsh images that lend intensity and force to his expression. The simile of “birds of prey” is an unexpected choice for a love poem; some might consider it bizarre for the poem to compare a lover and his mistress to birds of prey who want to eat, not be eaten by Time. The comparison says that the speaker wants to devour Time like a hawk devours a rabbit caught in the fields — rapidly, in the heat of the moment, unthinkingly and instinctively. Time with his “slow-chapt power” is imagined as slowly chewing up the world and its people; thus the speaker implies he and his mistress are in a desperate fight against Time.

In these lines, the poem uses the metaphor of a cannonball of “strength” and “sweetness” rolled into a concentrated package of energy that “tears” through the barriers of restraint. The juxtaposition of “strife” with “pleasures” indicates the ferocious breakthrough of the speaker’s argument winning over his mistress.

In the concluding couplet, the speaker and his mistress triumphantly turn back the destructive forces of Time, avidly eating Time instead of being eaten by it. The speaker and his mistress force the sun to race them instead of passively begging the sun to stand still like Joshua did in the Bible, when he pleaded with God to make the sun stand still so the Israelites might defeat the Amorites in broad daylight.

Labels: To his coy mistress by Andrew Marvell

POSTS AT A GLANCE